Your Complete Guide To Quitting Your Birth Control 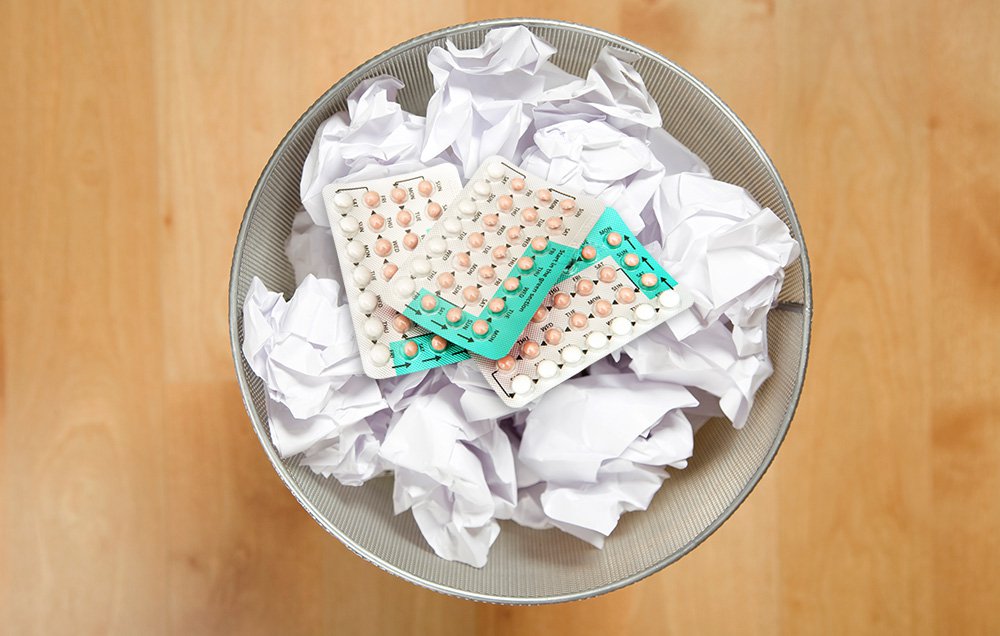 Maybe you've had too many close calls forgetting to take the Pill on time. Or perhaps you never got over the ick factor of sliding a plastic ring into your vagina every three weeks. Whatever the reason for your birth control break, it's important to make sure you go off that Pill or ring the right way.

The Pill and the ring each pump artificial doses of estrogen and progestininto your bloodstream to halt ovulation. Once you quit BC and those synthetic hormones are no longer circulating, your brain sends signals to your ovaries to wake up and start producing natural hormones, which prompts ovulation. "It's smart to have a plan in place and get a sense of what to expect in those first weeks, so you know what side effects might kick in and you'll have time to cover yourself with another contraceptive method if you don't want to get pregnant," explains Melanie Collins, M.D., ob-gyn at the Renaissance Women's Group in Austin, Texas. Here's everything you need to know about breaking up with the Pill or the ring.

How you should quit

From a medical standpoint, there's no reason you can't dump your pills at any point in your cycle. But ideally, the best time to quit is at the end of your pill pack, when you would expect your period to start anyway. "This way you stay on schedule," says Collins. Quitting another time can prompt breakthrough bleeding, as your body realizes it's not getting the regular dose of progesterone it used to, adds Mary Jane Minkin, M.D., clinical professor of ob-gyn at Yale University School of Medicine.

Side effects to expect

Once your system gets back in the swing of cranking out its own hormones again, weird things can occur—such as breast tenderness, moodiness, and then a heavier flow and more painful cramps as you begin to ovulate again. Not everyone experiences these symptoms, but if you do, know that they tend to ease up once your cycle evens out. Other body strangeness could include a ramped-up sex drive and acne breakouts. Now that the Pill is no longer suppressing your natural testosterone production, your body starts making small amounts of this hormone, which contributes to libido and acne, says Minkin.

What to know if you don't want to get pregnant

That infertile "grace period" that supposedly happens in the weeks after stopping oral contraceptives? Uh, that's not a thing. Even though it generally takes three or four days minimum before ovulation will kick in again, theoretically you could produce an egg hours after your last pill, says Minkin. Don't want a baby? Don't take chances. Cover yourself with another method of protection starting with your very first post-pill ride in the saddle.

What to know if you want to get pregnant

While you might end up knocked up right away, Collins suggests giving your body a few months for ovulation to kick in and your cycle to even out before actively expecting to get a positive pregnancy test. And this is super important: If you're thinking baby, start taking a prenatal vitamin the same day you stop taking the Pill. Look for one that includes folic acid, the B vitamin proven to prevent certain birth defects that happen in the first month after conception, says Minkin. Even if you're all about eating healthy and are sure you get your folic acid in food, play it safe with a supplement.

How you should quit

Just like ditching birth control pills, you can say sayonara to this flexy, hormone-infused ring anytime of the month, no harm done, says Minkin. But also like the Pill, you'll avoid breakthrough bleeding and stick to your regular schedule if you take your last ring out after three weeks as usual and just never put another one in again.

Side effects to expect

The ring has the same estrogen-progesterone combo as most oral contraceptives; the hormones are simply absorbed directly through your vagina rather than via your intestinal tract. Side effects are what you'd expect: breast sensitivity, mood swings, a heavier flow, breakouts, and more cramping. After your own hormones get back on track, these symptoms will likely even out, generally after a few months. But changes such as a higher sex drive and acne breakouts might be here to stay, since they could be triggered by the natural testosterone your body is now making again, without the hormones in the ring suppressing production.

What to know if you don't want to get pregnant

You need a new contraceptive method as soon as you take out your last ring. If you want a break from hormones and don't want to deal with a doctor visit, condomsare 98 percent effective in preventing pregnancy, says Dr. Minkin. She also suggests an IUD (99 percent effective), even if you're not sure what your future baby plans are. An IUD is hormone-free, so if you were experiencing unwanted side effects from the Pill or ring, you won't see them with your IUD. Plus, you can always have it taken out, says Minkin, should you decide you're ready for mom-hood. If you're not sure what to go with, check in with your ob-gyn, who can give you a run through of birth control options that mesh with your body and lifestyle, says Collins.

What to know if you want to get pregnant

You probably have a three or four-day window at the earliest before ovulation gets going again. But it's normal for ovulation to take longer than that, so don't worry if it takes two or three ring-free cycles before you conceive (and of course, conception can take months or years, especially if you're near 40). In the meantime, make sure you start taking prenatal vitamins with folic acid, says Collins, as soon as your body is ring-free and gearing up for ovulation.