Unless you have complications, such as placenta previa or a history of preterm labor, flying while pregnant is perfectly safe--at least for a while, says Paige Long Sharps, MD, an ob-gyn at Montefiore Medical Center, in New York City. But timing is everything. Although flying in the first trimester is fine as far as the health of your baby is concerned, morning sickness and fatigue can make it unpleasant for you. The sweet spot is between 14 and 28 weeks, when those symptoms are (hopefully) behind you, the risk of miscarriage has decreased dramatically, and third-trimester discomforts like backaches, swelling, and heartburn have yet to strike. Doctors say it's okay to travel after 30 weeks -- as long as you're not carrying multiples -- but you should stay grounded once you hit 36 weeks in case your little one decides to make an early debut. If you absolutely must fly late in your pregnancy, check the airline's policy to find out whether you'll need a doctor's note of approval. But no matter when you fly, try to book your flight early so you can nab the best seat: one on the aisle provides easy access to the bathroom, the front of the plane offers better air circulation, and the bulkhead boasts extra legroom.

Once you're in the air, there's lots you can do to ease pregnancy aches and pains. Stow a supply of ob-approved meds like Tylenol and Maalox in your carry-on, and wear stretchy, breathable clothes. It's also important to drink plenty of water and to keep moving during the flight, since pregnancy ups your chances of developing a potentially dangerous blood clot. Stretch by walking up and down the aisle every hour, and exercise while you're seated as well. One simple move: alternately pointing and flexing each foot. Aim to do three sets of 10 for each hour that you're in flight.

Most doctors suggest limiting drive time to six hours a day to maintain healthy blood flow. If you can avoid it, don't take a long car ride alone. Bring a companion in case you hit a snag -- or if you need to catch some shut-eye en route. Be sure to pack lots of water and snacks. Regularly scheduled rest stops are a must to keep circulation flowing and to allow for bathroom breaks, of course! Stick to major highways and know where local hospitals are, particularly if you're going into rural areas. If you want to stave off nausea or carsickness, it's safe to use Sea-Bands, Benadryl, or Dramamine, says Sheila Chhutani, MD, an ob-gyn at Texas Health Presbyterian Hospital Dallas.

Remember to wear your seat belt, no matter how uncomfortable it may be. Buckle up as you normally do, with your lap belt fitting snugly below your bump. Try to keep 10 inches or more between your seat and the dashboard and leave the airbag on. Not only will this protect you, but your baby will be safer too. 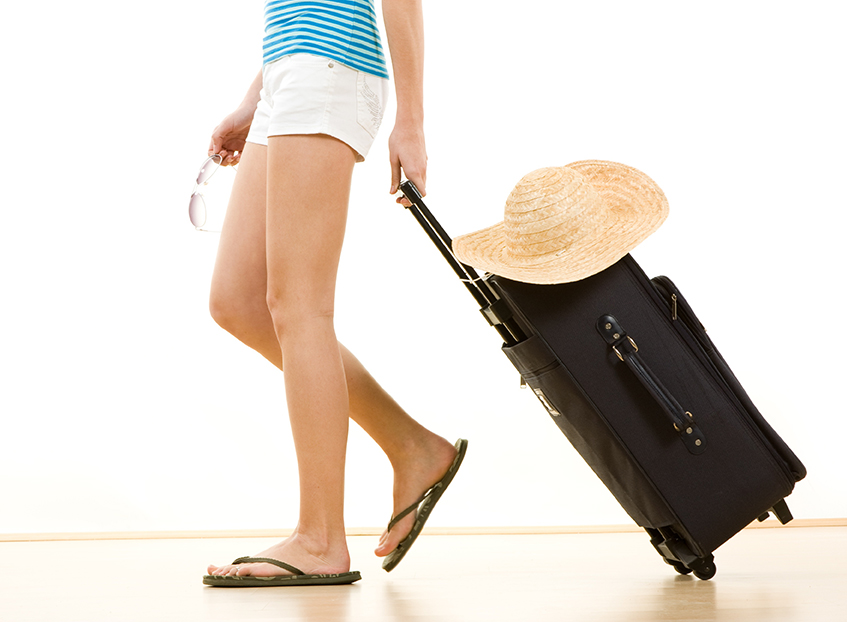 International travel is usually okay, but do your homework first by checking out your destination at the Centers for Disease Control (cdc.gov/travel). While popular tourist destinations like the Caribbean are generally safe, others require precautions to avoid illnesses like traveler's diarrhea, listeriosis, or malaria. Considering Mexico? Pregnancy makes you more vulnerable to tainted water, says Dr. Long Sharps, so drink bottled water only and remember to use it to brush your teeth. Avoid destinations like Africa and South America, where contagious diseases such as malaria and typhoid fever are more common and require preventive drugs and vaccines that could be harmful to you and your baby.

No matter where you're headed, clear your trip with your obstetrician first. She may advise you to avoid local foods, such as dairy products that may contain unpasteurized milk and foods sold by street vendors. Certain activities may also be off-limits. Avoid anything with a high risk of falling, including hiking, skiing, and horseback riding. Steer clear of scuba diving, which can cause decompression syndrome in a developing fetus. A prenatal massage from a licensed therapist at the spa is safe as long as you're lying on your side, says Dr. Chhutani, but skip the hot tub, steam room, and sauna.

If your job requires a lot of travel, you may want to talk to your boss about scaling back a bit during your pregnancy. But rest assured that as long as you don't have complications like high blood pressure or bleeding, frequent travel before your ninth month won't harm you or your baby, says Robyn Horsager-Boehrer, MD, an obstetrician at UT southwestern Medical Center at Dallas. If you're still uncomfortable with traveling, give your obstetrician a call. Some will write a letter saying that you should not travel. Pregnancy complications and limitations might make you eligible for temporary disability, which allows you to go on a leave of absence while your job remains safe. Wherever you're planning to go, try to take it easy when you arrive. You want to come back home feeling refreshed rather than depleted.

ur flight early so you can nab the best seat: one on the aisle provides easy access to the bathroom, the front of the plane offers better air circulation, and the bulkhead boasts extra legroom.