The Effect Of Music On A Fetus: What Every Parent Should Know

Music has been credited with many things – from calming adults with anxiety and depression to helping hone mathematical genius in young children. There’s even a segment of green thumbs who believe it can help plants grow better! So, if you’re trying to make a smarter baby by playing classical music or having the family sing to the baby through the mom’s belly, you may want to know how much it actually matters. Do sound and music affect a fetus? How does the baby in the womb respond to them? Some studies have claimed that the effect of music on a fetus includes improved cognition, motor skills, and attention span in newborns and that prenatal music can be a tool for auditory learning. How true is this? To get there, first, let’s see when a fetus can actually hear sounds and music. 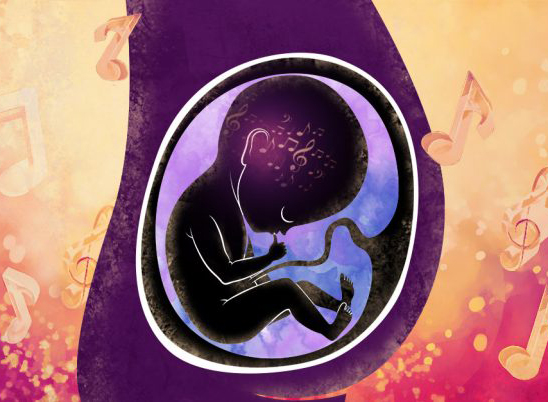 Most Fetuses Develop Hearing By Week 25

The baby develops the structural forms of the ears fairly early on, specifically during the first 20 weeks in the womb. The neurosensory development of the ears and the auditory system begins after this. On an average, most fetuses develop a functional auditory system by week 25 of gestation.

Research even suggests that fetuses can respond to tone frequencies of 500 Hz as early as 23 weeks into gestation. By 27 weeks, the range broadens to frequencies under 500 Hz. By 31 weeks when the baby is just 1.5 months from full term, it begins to respond to frequencies from 1,000 to 3,000 Hz as well. Human speech is typically in the 1,000 Hz to 5,000 Hz range, though music could hit higher pitches or go lower.

To test the effect of music on fetuses, one study tested their responses to a piece of classical music – a 5-minute rendition of Brahms’ Lullaby played on the piano. Researchers found that:

Going by this, we can conclude that a fetus is able to experience music and sound. But remember, they hear it differently from what you do because of the muffling from the amniotic fluid. Other sounds of the body also interfere with this, not to mention external ambient noise. But what effect does the music have on your baby?

Fetuses Can Learn Through Music

For your baby to learn while in the womb, certain things have to fall into place. For sound to make a difference, the fetus needs:

Newborns Can Identify Music Heard In The Womb

One study involved the playing of a certain soap opera tune to mothers-to-be during their pregnancy. The newborns aged 2 to 4 days, none of whom were exposed to the tune after birth, all became more alert when the tune was played. They were compared against babies whose mothers had not listened to that music while pregnant.

The researchers also found that if not continuously exposed to the music even after birth, the neonates forgot the melody. They also concluded that fetuses start responding to and recognizing familiar sounds between weeks 30 and 37 in utero.

A 2013 study looked at the effect of “auditory learning” in the fetal stage by playing the tune of “Twinkle Twinkle Little Star” 5 times a week to expectant mothers. The newborns were then studied at birth and then at 4 months, to see how they reacted to the same melody with some changes, as well as to the unchanged tune.

Those who had been exposed to the music before they were born were more responsive to the unchanged notes than the control group. Even the amplitude or extent of response increased directly in relation to how much prenatal exposure they had to the music.

The researchers concluded that the babies responded to melodies they had heard while they were in the mother’s uterus and that fetal auditory learning could come into play by the 27th week of gestation.

Not just the music but the language in which you sing a song to your fetus can matter too. There are a number of interesting researches that show how language learning begins in the womb.

In another study, Swedish and American newborns (7–75 hours of age) responded differently to a particular vowel sound in their native and non-native languages. The researchers surmised that they retained memories of the language they heard in the womb.A more recent study claims that fetuses as young as 16 weeks opened and closed their mouths and moved their tongues in response to loud music. However, this effect was seen only when the musical stimuli were transmitted through the vagina with a specially designed device,something that is possible only in a lab. But what’s important to note here is that researchers feel this is the fetuses’ initial steps toward language.

Learning Via Music Backed By Philosophy Of Garbh Sanskar

Traditional Indian ways have suggested the possibility of prenatal learning for centuries. According to this philosophy, a baby can be taught or exposed to positive values right from when it is in the womb. There are even pre-recorded compilations of affirmations and soothing music that you can play for your baby while it’s still inside the uterus. Called “garbh sanskar,” this approach has even been tested for its effectiveness in helping a woman have a normal healthy pregnancy.

In one study, expectant mothers, even before the 20-week marker of their pregnancy, were asked to listen to a 50-minute long recording of a combination of chants, sounds of nature, and instrumental music just before bedtime. Researchers concluded that garbh sanskar had a beneficial effect on the behavior of the newborn and could potential positively influence brain development.

Prenatal Music Can Have All-Round Impact On Baby

Several other studies have looked at the long-term impact of prenatal music on babies. Parents-to-be can take heart from the following!

A study from 1985 showed that babies who had been exposed to music before birth had longer attention spans, imitated adult sounds better, and tried to communicate through sound earlier.

A 1997 study exposed fetuses to about 70 hours of classical music on the violin from the 28th week of pregnancy to the end of pregnancy. These newborns had better gross and fine motor activities, language development, cognitive skills (some), and body coordination than those who had not been exposed to music.

A more recent 2012 study also found that music has a beneficial effect on newborns in terms of their alertness to visual and auditory stimulus and their range of behavior. What these abilities indicate is a higher mental function in the newborns.

If you sing lullabies to your unborn baby, here’s good news. It can increase your bonding with your baby. A very recent study finds that babies whose moms sang to them when they were in the womb cried less than babies whose moms did not. The babies also had fewer instances of colic in the 2 months after birth. They also woke up fewer times at night, and the moms were less under stress.

All in all, playing music to your little one in the womb can give them a nudge in the right direction.

Playing Music For A Fetus: Dos And Don’ts

While it may seem like a good idea to give your baby a head start, proceed with caution. This way you avoid unwittingly doing your baby more harm than good. Look out for the following to keep your baby (and yourself) safe and happy:

Don’t fall for gimmicks: Don’t splurge on items like special bracelets or bells on chains to wear so your baby can hear you in the uterus. These  are unlikely to be able to cross the hearing thresholds inside the uterus!