Is Your Dude Wearing The Right Size Condom? Here's How To Tell

Had Goldilocks been a woman living in 2017, she would have had a field day with condoms. From snug, to standard, to magnum, one size certainly does not fit all. 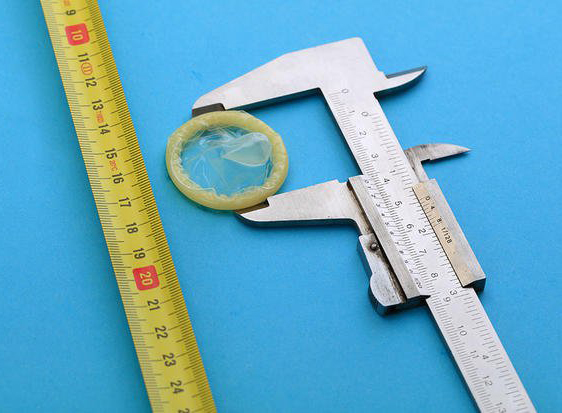 “Standard condoms fit a lot of people. But are there people who don’t fit because their erection is too small or too large? Yes, that’s definitely a reality,” says Logan Levkoff, Ph.D., a sex and relationships expert in New York.

Having an imperfect fit can result in slippage or breaks that can jeopardize the whole point of using protection. Here’s how to tell if your guy is wearing the wrong size condom and how to find your perfect fit.

“If a condom is too loose, then you risk it sliding down or off during any kind of penetration, which defeats the purpose of keeping your partner’s fluids from getting into your urethra,” says Levkoff. Yikes. Plus, getting down with a baggy condom isn't exactly the stuff great orgasms are made of.

You might be able to spot this issue just by looking. When you or your partner puts the condom on, it should roll down the shaft securely, lying flush with his flesh. If the condom starts slipping around during the action, or even comes off completely, that’s a sign you might need to switch sizes.

“If a condom is too tight or snug, it’s going to be uncomfortable,” says Levkoff. “That’s going to make it less likely for your partner to sustain an erection and reach orgasm.”

As a general rule, the clue a condom is too tight will mostly be based on feel—a.k.a. it might be hard for you as the partner to tell if your guy’s package is overly constrained. However, there are some clues you can pick up on. “If you’re the one rolling down a condom on your partner’s penis, you might notice if it’s incredibly snug,” says Levkoff. You may even see a line kind of like the one you get from wearing a hair tie on your wrist when you take the condom off, she says. That's a definite sign he needs to size up.

If it looks uncomfortable, it’s worth asking your guy if he’s feeling an unpleasant squeeze.

Ideally, you'd pick the perfect size up at the drugstore. But what happens if you realize that you didn't just as things are getting hot and heavy? Unfortunately, there's no fix outside of getting a new pack of condoms.

"There’s no DIY option,” says Levkoff. “As fun as condoms can be, they are medical devices regulated by the FDA. That means in order to maintain the integrity of the condom, it has to be used as designed.” No MacGyver-worthy plastic wrap tricks, please.

Instead of feeling frustrated in the moment, make buying condoms a fun part of foreplay—don’t be afraid to try different kinds until you find the right size, says Levkoff. “Rather than guessing, ask your partner what he buys and what he likes,” she says. Think of it less as an awkward question about what to put on your grocery list and more as an opportunity to get a little erotic together. “There is fun in having that conversation,” Levkoff says. “Can it be awkward? Sure. But, hey, sex is awkward. That doesn’t make it bad.”Consider this your excuse to experiment with all the options Golidlocks-style until you find one that’s just right.