Is It Normal to Have a Really Long Menstrual Cycle?

So many hormones, body parts, and external factors like stress play into having a regular, 28(ish)-day menstrual cycle that it feels like a biological improbability that the whole thing can happen month after month with relatively little drama. And sometimes it is improbable, and an irregular period happens. Thankfully, according to Planned Parenthood, that's very common.

"Irregular" is somewhat subjective because no two people have the same exact menstrual cycle, and what counts as regular for you may be extremely irregular for a friend. Dr. Alyssa Dweck, a gynecologist in New York, said a healthy menstrual cycle lasts between 21-35 days, with bleeding lasting between two to seven days.

But what if your regular menstrual cycle always falls outside of that range and you consistently get your period every 60-or-so days? Dweck explained some of the reasons why some people only get their ~monthly gift~ a few times a year, what that may signify, and when you should see a doctor. 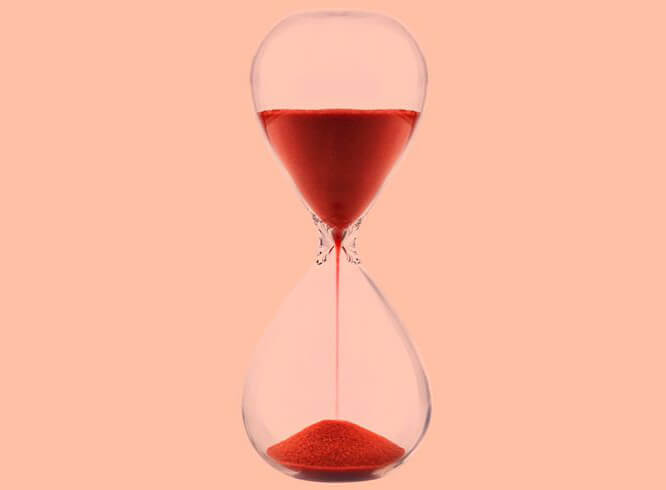 The menstrual cycle lesson you probably never got

According to Planned Parenthood, the menstrual cycle is primarily controlled by the hormones estrogen and progesterone, and its purpose is to facilitate a pregnancy and keep everything flowing in the absence of one.

Hormones signal one of your ovaries to release an egg about halfway through the cycle, about 14 days before the start of your next period. Some people feel a tiny pinch or have light cramping with ovulation, and some people feel nothing. The egg stays in the fallopian tube for about 12-24 hours, and that's when you're most likely to get pregnant. If no pregnancy occurs, the unfertilized egg travels from the fallopian tube and into the uterus.

How long between periods is too long?

Secondary amenorrhea is a condition in which someone who's been having regular periods stops having them for at least three months, according to Dweck. But before you wait three months to see if your missed period qualifies as amenorrhea, you should definitely take a pregnancy test.

"If somebody has an established cycle of every month, and they miss a month or two, they need to be checked for pregnancy," Dweck said. "If that's negative, then after three months of no period, it is very reasonable to get checked out by your gynecologist to figure out what's going on." She noted an exception, of course, for people who take continuous hormonal birth control, and only get their periods every three or more months because of medical intervention.

The order and number of tests your doctor orders depends on other symptoms you might have, but Dweck said you can expect blood testing, possibly an ultrasound, and, rarely, a brain scan. Most doctors will also try prescribing a concentrated dose of one of the hormones found in birth control to try and restart your menstrual cycle and get you back on track.

Aside from the obvious answer of pregnancy, Dweck said polycystic ovarian syndrome (or PCOS) is a very common reason someone might get their period regularly but outside of the 35-day window of what's considered normal. PCOS is a common hormone irregularity — up to 10 percent of people who menstruate have it. It's characterized by a hormonal imbalance and elevated levels of testosterone, and causes menstrual abnormalities like long cycles and a lack of ovulation.

"Women typically have a lot of symptoms, but one of the tell-tale symptoms [of PCOS] is irregular bleeding, or missing your period and getting it every three to four months," Dweck said. Other symptoms people usually develop with PCOS make it more recognizable — things like acne, thicker hair growth in typically male places (like the chin or upper lip), difficulty losing weight despite a healthy diet and exercise, and a resistance to insulin are all common PCOS symptoms.

Dweck sees PCOS all the time in her own practice, and said there's no single answer for how often someone with PCOS will get their period. It could be every two months, every six months, consistently for three months in a row and then nothing for eight months — it's unpredictable. The important thing either way is that you see a doctor if you think you've got PCOS. It's not 100 percent curable, but Dweck said there are ways to treat it, and if you're trying to get pregnant and are having difficult because of less frequent ovulation, a gynecologist can help with that, too.

"The mainstay treatment for polycystic ovarian syndrome is lifestyle change — diet and exercise," Dweck said. "We also put people on medication, including the birth control pill. For lots of these women, if they're having sex and missing their period or getting their period every couple of months, they're nervous that they're pregnant. [Birth control pills] give some regularity and protection against pregnancy."

Other causes of long menstrual cycles

Aside from pregnancy and PCOS, Dweck said thyroid issues can cause a period to come irregularly. Since the thyroid is what regulates metabolism, if it's over- or under-active, a thyroid issue might show up as a lag between periods. This is why a doctor will do blood work if you're getting checked out for secondary amenorrhea.

There's also stress. "When I say stress-induced irregular periods, I'm talking about significant stress that's chronic," she said. What counts as chronic stress varies from person to person, but think something more like an all-consuming situation that persists for weeks or months. Dweck said something like a big test in school doesn't typically qualify as chronic stress that should cause a missed period.

And then there are cases where someone doesn't have PCOS, has a healthy thyroid, isn't pregnant, isn't yet approaching menopause, isn't on birth control, and is cool as a cucumber in terms of stress, and only gets their period every couple of months. After a certain amount of time menstruating, once periods regulate (they can be kinda wonky for a while after you first start getting them), you know your body well enough to know when to expect a period. And if you don't, there's literally an app (many apps) for that. Dweck's biggest piece of advice is know what's normal for you. Then, if you stray from that norm, you'll have a better sense of when it's time to see a doctor.

Dweck said that, if you see a doctor for suddenly irregular periods and nothing seems to be wrong, it's not unhealthy to only get your period on a slower schedule than once a month."If they're getting [a period] every three to four months, that's reasonable and nothing further needs to be done," she said.