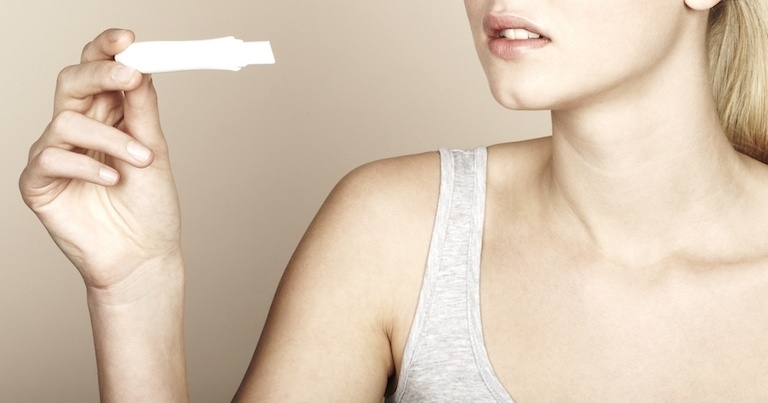 Unless you're actively trying to get pregnant, there's a good chance you know more about what it takes to prevent pregnancy than to conceive. Whether you're ready for a baby or think you might like to have one someday, health-care professionals say it's time to learn. As Dr. Sharon Vorona, physician and medical director of Figure 1 — an app that lets health-care providers share photos and info related to their cases with each other for discussion — tells Cosmopolitan.com, "If you know that it’s something that you want in your life, then it’s good to have an understanding of the science behind ovulation and the factors that affect fertility." Ahead, ten things that you should know about fertility and trying to conceive, or TTC, right now.

If your period is irregular, you shouldn't just brush it off.

When you're trying to conceive, your period is more than an annoyance: It represents the possibility of pregnancy. Over the first half of a 28-day menstrual cycle, the average length, your uterine lining thickens in case there's an embryo for it to nourish while one of your eggs matures until it travels through the fallopian tube to your uterus. If the egg isn't fertilized by sperm, it will break down and leave your body, along with that unused uterine lining — aka your period. "An irregular or infrequent period is going to reduce the number of opportunities that there are for you to get pregnant," Dr. Vorona says. "Make a note of infrequent or irregular cycles, track them, and speak with your health-care professional. Understanding your ovulation cycle is really important for understanding the optimum time to [try to] get pregnant and also how you can take steps to make it regular." There are many reasons your period might be absent or irregular, including stress, disordered eating, extreme weight loss, overexercising, some medications, and hormonal imbalances. These are in and of themselves very good reasons to see a doctor, whether or not you're TTC.

Lifestyle plays a role in your fertility.

You certainly can't control every aspect of your fertility — environment and genetic background play a role in the development of conditions such as endometriosis, hormonal imbalances, and autoimmune disorders, for example, all of which can affect it — but there are things you can do to up your chances of a healthy pregnancy. "Smoking cigarettes can impact your ability to conceive, and that includes secondhand smoke," Dr. Vorona adds, as can excessive drinking and an unhealthily low or high weight. She doesn't give hard and fast guidelines on what constitutes weight extremes for any one person — body mass index has its flaws as a measurement — but it's worth noting that women who are obese (with a BMI of 30 and above) and underweight (with a BMI of 18.5 or less) are more likely than others to experience disruptions in their hormonal levels and menstrual cycles, which can make conception difficult.

"STIs like chlamydia and gonorrhea play a big role in infertility," Dr. Vorona says. "If they’re untreated, they can cause pelvic inflammatory disease, which means your fallopian tubes aren’t functioning as they should." What's more, sometimes these infections have no symptoms: "It’s one of those silent causes of infertility that a woman may be unaware of." Consider this yet another reason to practice safe sex, get tested regularly, and treat any infections promptly. Another STI that can mess with your ability to conceive: HPV. Simply having HPV won't negatively affect your fertility, but it can increase your chances of developing precancerous or cancerous cells in your cervix, which may. (Unlike gonorrhea and chlamydia, HPV isn't curable, but there is a vaccine that's recommended to girls and boys to protect against it.)

The single most important factor in fertility is age.

If you're trying to conceive, it's supplement time.

"Folic acid is something that you need to take in order to reduce the risk of your baby developing a neural tube defect," or defect of the brain, spine, or spinal cord, Dr. Vorona says. According to the CDC, women should start taking 400 micrograms of this B vitamin a day basically as soon as they've decided they're going to start trying for a baby, since most women are pregnant for a few weeks before they even know it and you want the fetus to be getting that folic acid from the start. Keep in mind that different people need different amounts: "Some medications, mean that you need to take a greater dose of folic acid, and so it’s definitely a good idea to see your health-care professional and go through your medical history and the medications that you’re taking to understand if you need a higher dose," Dr. Vorona explains, "and if the medications that you’re on mean it’s safe for you to conceive or if they need to be changed." Taking a multivitamin, meanwhile, has been shown to reduce the chances of miscarriage.

What you drink when you're TTC matters — and that means both alcohol and caffeine.

If you don't smoke and you're getting good sleep, nutrition, and exercise, you're on the right track. Next, Dr. Vorona recommends cutting out alcohol, because it can be harmful to a developing fetus and again, most women don't know they're pregnant for the first few weeks. Another beverage you may want to reconsider: coffee. "There have been a number of studies that have talked about coffee consumption and how it impacts a couple’s ability to conceive and miscarriages," Dr. Vorona says. A recent one found that a woman's risk of miscarrying is higher if she and the person responsible for providing the sperm consume more than two caffeinated drinks per day in the weeks prior to conception. (Yes, a double-shot latte counts as two.)

Every woman is different, but sudden stress, such as that you experience when a traumatic event occurs, can interfere with ovulation (have you ever been so strung out about something that your period was late?). Some research on longer-term stress does suggest that women who have it take longer to conceive, although causal links are less clear. Regardless, feeling stressed out all the time is no good for your health in general and can certainly make the prospect of having sex a lot less appealing — bad news if intercourse is the technique you're using to try to conceive.

Most fertility apps and trackers don't live up to their promises.

Dr. Vorona cites a recent study that showed that of over 50 apps and websites that claim to help you track your fertility, the majority gave inaccurate information. Instead of relying on an app, you can begin by taking your own notes about your menstrual cycle, Dr. Vorona says: "The ovulation cycle is going to vary from month to month for most women. Start at day one when your period starts and keep track of it, knowing how long it lasts and when your next period begins, and do that for a few months. See if there’s consistency in terms of the length of each cycle, and calculate when you’re most likely to ovulate based on that." You're most likely to get pregnant on the day you ovulate and the three to five days beforehand, aka the lifespan of sperm. You can also monitor your basal temperature and cervical mucus: "Both of those can help you understand exactly when you’re ovulating and the time it’s best to have sex in order to conceive," Dr. Vorona says.

The sperm could be the reason if you're having trouble conceiving.

"It’s important to remember that 40 percent of cases of infertility are actually down to male infertility," Dr. Vorona says. She says that gynecologists with whom she's worked report that some female patients believe only women can be infertile, although this couldn't be further from the truth: It takes two to make a baby, in more ways than one.