If you eat healthily you will never have periods, you choose when your periods start and any woman who is annoyed or irritated is automatically on their period right? Absolutely not!

It’s the 21st century and people continue to hold on to such taboos. As ridiculous as this sounds, these and many more misconceptions about menstruation continue to be passes on spurring all manner of false beliefs. 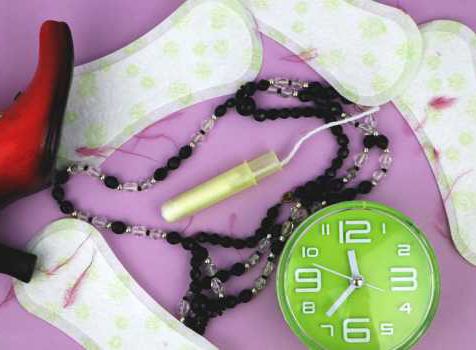 This touchy subject puts many girls and women at a position of uncertainty and worry about asking for advice.

A perfect example of one scenario is the endometriosis scandal. Often misdiagnosed, it leaves sufferers with depression and other problems yet it is estimated one in every ten women is affected.

To finally put some of these myths to rest, here are five greatest misconceptions people have about menstruation.

1.You can’t get pregnant if you have sex during your period

Despite its populairy, this is simply not true. There is the belief that you can’t get pregnant on your period because your uterus is shedding its inner lining. Truth is, ovulation and the menstrual cycle can be unpredictable and ovulation can happen before, during and after the bleeding phase, especially if your period is irregular.

Whether you have a long or short cycle, the egg you release during ovulation can live for between 12 and 24 hours. Sperm can live for about 3 days. So the closer you are to the end of your period, the more likely you are to get pregnant especially if you have a shorter cycle of 21 days then you are likely to ovulate around Day seven.

While this could be a personal preference, it is believed by many that bloody sex aka period sex is dirty and unhygienic. This has been ingrained in many who think vaginal blood is gross and different from say blood coming from a knee.

While this is a fear many women have, it is actually not that bad. Have you ever been able to smell when someone else was on their period? Doubtful. Despite each of us having our own natural body odor, menstrual blood itself has no odor. It’s made of blood and tissue that sheds from the uterus and when mixed with the naturally occurring bacteria in your body, may smell a little less than fresh. So there, no need to worry about it.

4.PMS is all in your mind

This is not a made-up situation to justify cravings, mood swings and different emotions, it is in fact a very real thing. Varying levels of estrogen and progesterone affect the bodies and brains of women causing irritability, fatigue, cramping and a plethora of other unpleasant symptoms. This is not concoted notion, but remains very real to every woman because throughout their menstrual cycle, their hormones constantly change.

5.You bleed a lot

While it may look like it, it is all fiction. The average woman only loses about 2 to 3 tablespoons of blood during her period. Even those with heavy bleeding or menorrhagia their uterus still only releases about 4 tablespoons of blood. You should only be concerned when you’re using several pads or tampons a day, bleed for more than seven days and you’re experiencing symptoms of anemia.