10 Things You Might See In Your Underwear & What They Mean 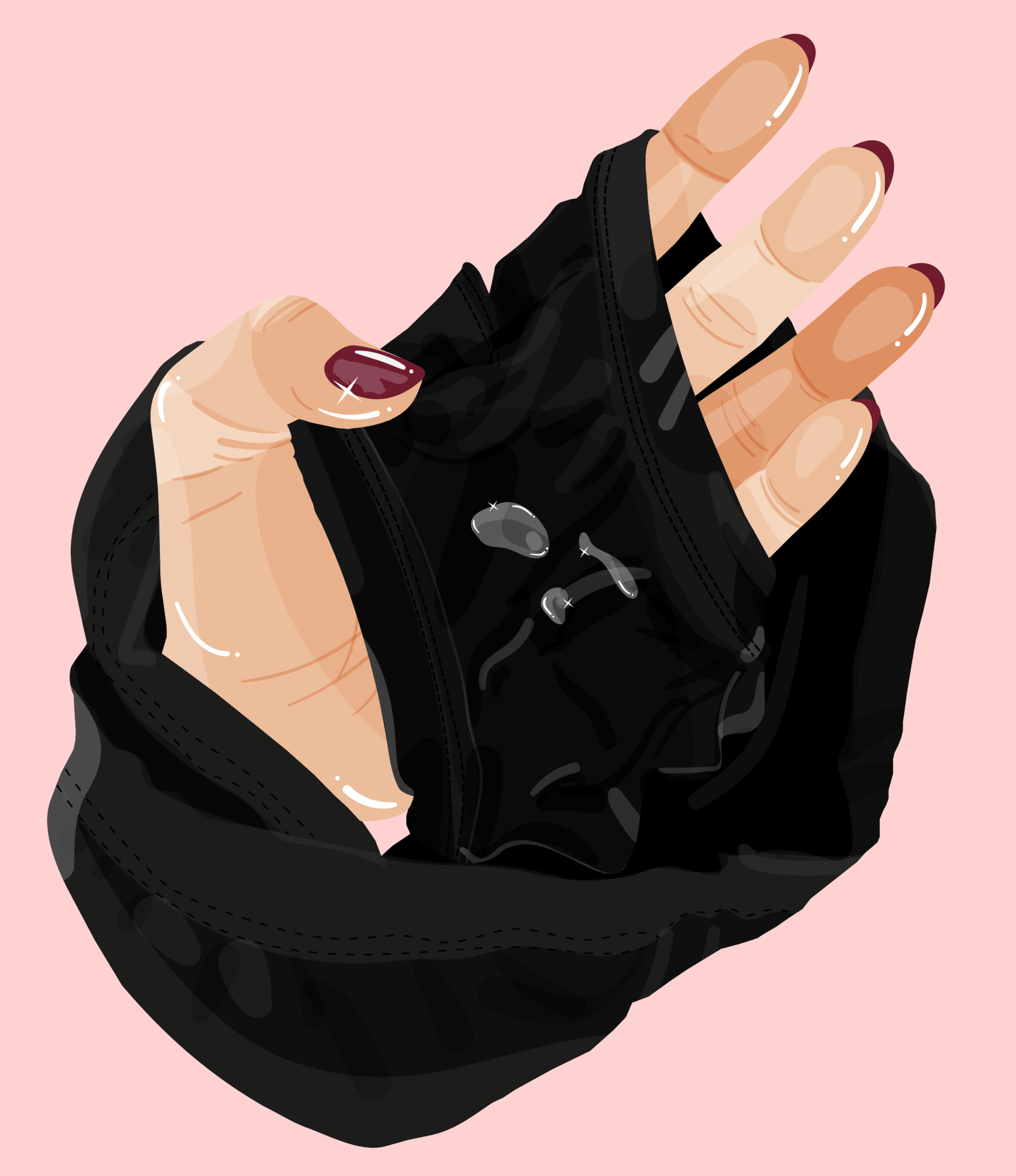 In her HBO special last year, Amy Schumerjoked that one of her New Year’s resolutions (along with catfishing someone) was to “just once take off a pair of underwear and make it not look like I blew my nose in it.” It’s funny because it’s true: Why does having a vagina have to be so goddamn messy?

A lucky few have so little vaginal discharge, it’s not even noticeable. But for the rest of us, discharge is an (almost) daily occurrence. However much you may relate to Amy’s joke about wanting to be rid of it, you should know that discharge isn’t usually something you need to be worried about. “It’s completely normal to have anywhere from no noticeable discharge to up to one tablespoon per day,” says Leah Millheiser, MD, director of the Female Sexual Medicine program at Stanford University Medical Center. “Vaginas are self-cleaning ovens: Discharge is just your vagina cleaning up by shedding old cells.”

And while discharge might sometimes ruin a great pair of undies, if you’re paying close attention, your discharge (the type, color, and quantity) can tell you some crucial things about your health, such as when you’re most likely to conceive or if you’ve contracted an STD. You just need to know how to read it. In other words, your discharge is your friend — it’s definitely not something you need to feel ashamed of or even grossed out by.

Ahead, we go over what’s normal and what’s worth getting checked out, along with some very specific examples of what that looks like.

Before we get into the nitty gritty details, you should know (if you haven’t noticed already) that vaginal discharge tends to follow a fairly predictable pattern depending on where you are in your menstrual cycle. What’s typical: A small amount of discharge in the days post-period to just before ovulation (mid-cycle), when it’ll get a little bit heavier for a few days. After that, the amount slowly decreases until right before you’re due for your next period. You may notice some variation in color, thickness, and texture, but for the most part, normal discharge is either clear or white.

If you’re not ovulating — i.e you’re pregnant or on hormonal birth control — you won’t have the same cycle of discharge as someone who is, Dr. Millheiser says. Those on hormonal birth control may not notice any discharge, or they may only have a small amount of clear or white fluid throughout their cycle. Pregnant people usually notice a steady stream of heavier discharge due to increased levels of estrogen.

Here’s what normal discharge tends to look like, based on where you fall in your cycle.

If you recently — within the last three-ish days — finished your period, you might notice one or two days of light brown or dark brown spotting, Dr. Millheiser says. This is totally normal: It’s simply your uterus shedding the last of its lining. The reason for the darker color compared to your period? It’s older, oxidized blood mixed with cervical mucus.

After your period ends and until ovulation, you may notice a little bit of discharge that is thin and whiter in color. You may also not notice any discharge at all. Both are typical.

Around the time of ovulation, typically mid-point in your cycle, you’ll notice an increase in discharge for one or two days that is similar to an egg white in color and sticky to the touch. If you’re trying to get pregnant, now is the time to have sex. If you’re not, now is the time to double down on effective birth control. “Keep in mind you’re most fertile not just during ovulation but in the days before and after,” Dr. Millheiser says. “The egg spends a few days in transit, so you have some time on either end to conceive.”

Obviously, red blood suggests your period has arrived (#blessed). But red or reddish-brown spotting could also be ovulation bleeding, if it happens around days 13 to 16 of your cycle. Turns out, hormonal changes that allow for the release of an egg can also cause a little bit of your uterine lining to shed. Not all people who ovulate experience this, so don’t be concerned if it doesn't happen to you. If it does, though, and you’re trying to conceive, Dr. Millheiser recommends tracking which day in your cycle you typically experience the bleeding and then timing sex accordingly. So, if you usually have ovulation bleeding on day 14 of your cycle, you want to have sex on days 12, 14 and 16 — basically alternating days around ovulation, Dr. Millheiser says. (Daily sex can actually decrease your partner’s sperm count, requiring a few days off to rebound, hence the every-other-day rec.)
If you’re not trying to conceive, though, ovulation bleeding can be frustrating, especially because it can sometimes come with annoying not-quite-full-blown cramps called mittelschmerz. This is where ibuprofen and pantiliners come in. At least, since ovulation bleeding is regular, you can keep track of it and remember protection for your undies. Or you can talk to your doctor about going on the birth control pill, which stops ovulation.

Remember, though: It’s only ovulation bleeding if it’s happening at the same time each month, around the middle of your cycle. Otherwise, you may be dealing with irregular periods, which could be a sign of a hormonal issue, such as a thyroid problem or polycystic ovary syndrome (PCOS). So be sure to check in with your doctor if this is a new thing, or if you can’t find a pattern.

After ovulation and up until a few days before your period is due, you may have clear, but thicker discharge. Typically the amount of discharge you see is lighter compared to when you were ovulating.

In the days right before your period, discharge may change, becoming thicker and whiter. This signals your next menstrual cycle is about to start.

If you’re pregnant, your discharge will probably look like this pretty consistently throughout the 40 weeks. This is known as leukorrhea and it’s caused by pregnancy hormones.

Now onto the more worrisome varieties of vaginal discharge. In general, you’re looking for drastic color changes (like green or grey) or texture changes (lumpy or frothy), which can signal an infection. Other more subtle changes, like a sudden increase in the amount of discharge you’re producing, can also be a sign you should see your gyno. For example, common STIs like chlamydia and gonorrheacan sometimes (but definitely not always) cause abnormal discharge, but these changes vary widely based on the individual. The lesson: Pay attention to what’s normal for you, so you know when something is off.

If you experience discharge that resembles cottage cheese — curdled, thick, white — and also have vaginal itching, burning or irritation, this may signal a yeast infection, Dr. Millheiser says. If you’ve had one of these a few times before (so you definitely know the drill) and you aren’t pregnant, you can probably treat with an over-the-counter antifungal cream.

But if this is your first time or you’re expecting, it’s a good idea to call your doctor. He or she can confirm the diagnosis and recommend a course of treatment. Other infections, like certain STIs and bacterial vaginosis, can sometimes mimic the symptoms of yeast, so it’s a good idea to make sure that’s what you’re dealing with. Also: If you’re pregnant, treating a yeast infection is slightly more tricky. Partly that’s because pregnancy makes it more likely that the infection will become recurrent (ugh), and also because only certain treatments are recommended if you’re expecting.

“If you’re on birth control, breakthrough spotting is likely because the hormone concentration of your birth control is either too high or too low and may need to be adjusted. Or, if you’re on a new formulation, your body may just need a few months to adjust," Dr. Millheiser says. “If it’s possible that you could be pregnant, spotting in the days leading up to your expected period (and for up to two weeks after) could be a sign of implantation bleeding — when the fertilized egg implants in the uterus.”

If you’re not on hormonal birth control and there’s no chance you could be pregnant, brown spotting throughout your cycle could be a symptom of an abnormal growth, either a benign fibroid or endometrial cancer, Dr. Millheiser says. While cancer is rare in premenopausal women, it does occur and you should get an appointment ASAP if the spotting is continuous.

You might not notice the frothy part, but it’s hard to miss discharge that’s green. Green discharge combined with vaginal irritation is typically a sign of an STI known as trichomoniasis, which is caused by a parasite, Dr. Millheiser says. Treatment involves oral antibiotics for both you and your partner.

Milky gray discharge that smells fishy — the smell typically gets worse after your period or after vaginal sex that involves ejaculation — is likely caused by bacterial vaginosis. This infection, also known as BV, is caused by an imbalance in the bacteria normally found in your vagina. It can sometimes go away on its own, but many women need a course of antibiotics to get things back on track. While it’s not an STI itself, it may increase your risk for contracting an STI, so it’s good to just nip it in the bud. (You will likely want to anyway because the smell is not pleasant.)